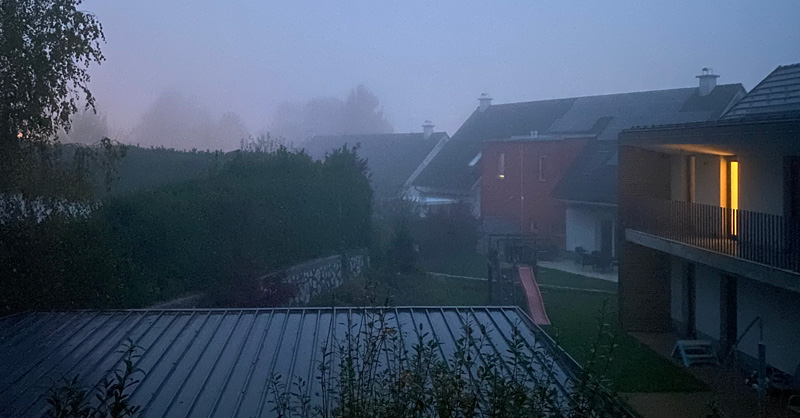 Your alarm clock wakes you up at 6:30 every morning, except on Sundays and every other Saturday, when your son doesn’t have a basketball game. You tap snooze, because you’re 41 and you know yourself.

First you stare at the window for a minute, looking at the fog, sadly typical for Ljubljana basin and this time of the year. Dimmed light is coming from your neighbours’ windows and, if the fog isn’t too thick, some houses on the hills you can see in the distance. Inside those houses, adults have just woken up, too, and, like you, are probably looking out their window.

You grab your phone and scroll through the notifications accumulated overnight. Some of them are inviting, but you resist the urge. Sometimes you can’t, but another alarm straightens you up. Literally.

You sit up, remove your t-shirt and place both feet on the heated floor next to your bed. You spend another minute staring at that floor, contemplating whether you’ve been taking the warmth under your feet for granted. You continue to ask yourself the same question whilst taking a quick shower. Or perhaps you would like to think it’s quick but, in all honesty, it could be much quicker, couldn’t it? The guilt makes you turn the valve and finish your shower with lukewarm water. “Fuck you, Putin”, you exclaim.

You are awake. Awake and facing your life. It’s not a bad life.

Verses appear in your head:

Oh, Ljubljana fog
You remind me of my dog
White, fluffy and fat
A decision I regret
But can’t get rid of now
Because I made a vow
Not to break my children’s hearts
…

That last one doesn’t rhyme and the engineer inside of you isn’t satisfied. The artist doesn’t care, though. As they’re about to start a debate, another alarm reminds them it’s not an ideal time for poetry. Because waking yourself up was the easy part. Waking your kids up is where the plot usually thickens. Every morning, for what now seems like forever.

You sit next to their beds and marvel at the miracle that is the two of them lying peacefully, quietly, demanding no services from you (while hanging from a chandelier or climbing your back).

Another alarm. Your smile disappears. The rollercoaster flies down the tracks and you find yourself counting down the seconds before you impose sanctions on the two most important persons in the universe. There won’t be any Minecraft on Friday unless they’re on their feet by zero.

You feel like Anna Wintour’s father as you negotiate the selection of coulours that shall be deemed fashionable enough by the smaller of the Kings. You beg the older King to wear a clean sweatshirt to school.

As particular as the smaller King can be about fashion, she doesn’t appreciate your attempts to calm her hair. No, that wasn’t a lapsus: her hair literally looks like stormy seas. She sees no problem in it, though. The problem she does see, however, is too much milk in too little Čokolešnik.

While driving your Royalty to school, one of them is demanding you play “Summer Jam” for the 465th time since summer. She just calls it “the song” now. But you can’t acommodate the request at this point, because the other King is trying to reach the radio station and win… a scarf.

You watch the road and think about fluid dynamics. Yes, fluid dynamics. What laws of physics, you wonder, cause you to get stuck in a different place every morning? You’re considering some rules that may unclog the system. Say, public flagellation of drivers who treat themselves to an overly generous safety distance in a slow moving, morning traffic, in which everyone is late for either school, work or heart transplant.

The traffic halts, unsurprisingly. While the two Kings fight over access to the car’s Bluetooth, you’re trying to think of a package of sanctions you can threaten with to make them stop. Or bribe? But your thoughts wander off:

“Who in their right mind would choose to do this job?”

If your family were a corporation, there would be a Chief Happiness Officer trying to think of ways to make you engage more with your repetitive tasks. Maybe they’d send you some stickers.

They wouldn’t need to, though, would they? The mission of parenting and the vision of your two Highnesses someday becoming good people are crystal clear to you. You are vertically aligned. And you love them, anyway. Unimaginably. And you have no illusion these mornings won’t be the best part of your life.

And look, you’re moving again. But you almost wish you didn’t.